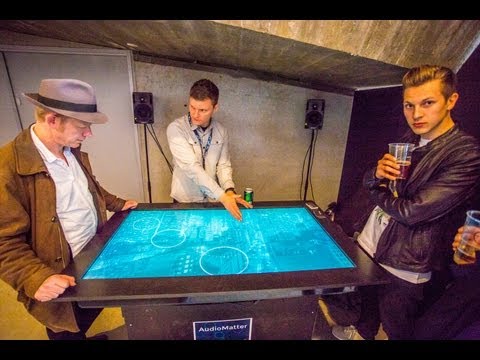 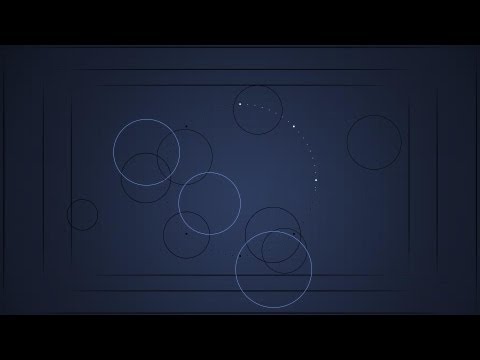 (scroll left & right in the slider for more videos)

interactive music with a touch based interface

AudioMatter is an interactive and generative music concept that lets you dive into the musical universe of different artists. Intuitive, minimalistic interfaces allow you to interact with musical ‘building blocks’ in the form of structures, harmonies, timbres, and melodies. You go from being a passive listener to being the co-creator and remixer of what you hear – and the music goes from being a monologue to being a dialogue between you and the artist.

In the current version of AudioMatter, you interact with it by placing two fingers on the multitouch surface to create ‘matter’ objects represented as circles. Play around with the circles and set them in motion – when they collide they ring with melodic and tuneful sounds.

After a short while, the current ‘layer’ of circles you are interacting with will sink into the background and keep on playing the way you left it, and a new layer with a new, unique sound will spawn in the foreground for you to interact with. This way you create layered, musical chain-reactions, from which unforeseen and unique musical pieces emerge that blend together with the background beats and samples of the track.

AudioMatter is presented as a proof of concept that can be used for branding purposes and as a platform for Interactive Music Releases (IMRs) – an interactive equivalent of music tracks. We imagine IMRs like AudioMatter as a new and unique product for the music industry. IMRs would be developed in close collaboration with innovative music artists, who wish to expand their audience and push the boundaries of musical expression.

When artists work with these Interactive Music Releases, they will design and create the individual sounds and samples as well as the rules and boundaries for the musical progression, harmonies, etc. In other words, they will define the overall sound, feel, and frame of the sonic universe you are exploring; it will sound distinctly like the artist in question, but what actually happens in that universe and how the music progresses, is very much up to you.

The video above showcases the current state of our prototype. It is in constant development with new music, interfaces, and interaction principles being tested and added in an iterative process. In the future, AudioMatter could be distributed as a downloadable application for multi-touch interfaces including phones, tablets, and interactive tables.

AudioMatter is designed and developed by bitCrushers. It was exhibited at SPOT Festival at Godsbanen in Aarhus, Denmark – 2-4 May, 2013 – in collaboration with The Centre for Advanced Visualization and Interaction (CAVI), Aarhus University.

Technology & Tools
The visual interface was created with the Unity game engine. The generative sound system was created with the Ableton Live music software and its embedded visual programming language Max For Live. In the videos, AudioMatter runs on the table based touch screen Multitaction Cell 55″.