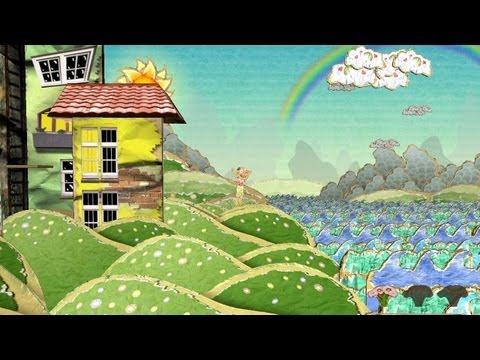 Flipside is an indie platform game where you have to help the deeply disturbed main character, Hannibal, escape from a mental asylum. The main features of the game are the handmade aesthetics and the ability to flip the camera 180 degrees around the character and see the game world from the opposite side. The two sides of the world are very different, and its inhabitants and the main character behave very differently, depending on which side you are watching them from.

The aesthetics are based on a very analogue and handmade concept. All the visual objects were created using actual cardboard and then scanned into digital form and textured with scans from physical magazine cut-outs and pieces of fabric. The sound design and music is based on this same handmade and analogue concept, using many real-world sounds and instruments – like sampled sounds of actual cardboard for the movement of the main character. The soundtrack has an adaptive element to it as well, introducing additional instruments when different (fr)enemies enter the screen.

Flipside was developed by Team 3 of the 2007 Class of The National Academy for Digital, Interactive Entertainment (DADIU). The game was nominated for the “Student Showcase Awards” at the Independent Games Festival, 2008, in San Francisco.

Sound Design
The concept for the sound design was to support the overall game aesthetics of having a quite caricatured and handmade cardboard-like feel, as well as supporting the contrast of the two different sides of the world while still maintaining an overall coherency to tie it all together. We also took a somewhat minimalistic to avoid over-saturating the soundtrack.

I worked mainly on designing sound effects & soundscapes, doing sound scripting/implementation and on designing and implementing the adaptive music system.

Each of the two sides of the world has its own basic, musical theme. The adaptive music system adds a new instrument to the theme song when the main character is near an enemy/NPC. E.G. on the happy side, getting near the bunny will add a tuba, and getting near the bee will add a ukulele. The system is metronome based which ensures that the instruments will always be introduced on the downbeat instead of being faded in to give a very smooth and seamless feel. This did, however, introduce some minor timing issues when switching sides.

The main design point for the sound effects was to make the world come alive and to give the player auditive feedback on game events and actions performed. Each relevant character, object, and action was given its own unique set of sounds, and this was further enhanced by making these sets different depending on which side of the world the player was in. E.G. a jump on the happy side sounds different from a jump on the dark side.

The sounds on the happy side are generally dreamy, harmonic and floaty, and a number of them are based on musical instruments that gel with the background music to create the harmonic feeling. E.G. the sound of a small bell when the player picks up a flower or the sound of a kettledrum when he jumps on a cloud. The sounds on the dark side are heavy, massive and raw and are based on disharmony to support the dark, dangerous and violent environment.

The voice acting was done by the Danish cult personality Hannibal Hildorf, as the idea for the game was partially based on his personality.

Technology & Tools
Flipside was created as a mod for first person shooter Half-Life 2 (yes, really!), and runs in Valve’s Source game engine. The main tools used for audio creation and processing were Cubase and Wavelab. The sound implementation was done in the Hammer level editor and by scripting in the Source SDK and in the HL2 Model Compile Kit to control the timing of sounds for animations.