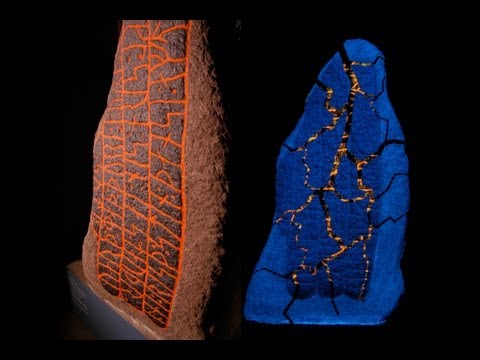 This project served as an experiment about how to engage museum visitors using animation, text, and visual effects as elements of projections on the Danish rune stone, The Mejlby Stone. The installation fuses the physical exhibit and the communication of information by projecting Roman lettered text and graphics directly onto the stone, thereby bringing to life the story carved in the stone 1000 years ago, for a present-day audience. What is unusual about The Mejlby Stone installation is that the exhibit itself, the rune stone, is used as the screen.

By interacting with the rune stone, the audience become an active part of the storytelling. The digital layer consists of different elements presented cyclically, supported by an immersive soundtrack.

The first element is an animated film which tells the story of the events that led to the erection of The Mejlby Stone. The film ends by depicting one of the characters carving the runes into the stone.

This prompts the shift to the next element of the installation, where visitors see the runes appearing on the stone as they are carved. After this a visual sequence appears, showing the passage of time: rainstorms, frost, and fire progressively efface the runes from the surface of the stone.

Then the final element, the interactive rune game, in which the runes reappear on the stone in neon colours, and then appear to tumble to the floor in front of the stone. The audience is now supposed to kick the runes back onto the stone – and every time they do so, they unlock a new layer of the adaptive soundtrack that plays during the game. When all the runes are restored to their correct positions, they transform into Roman characters, legible to a present-day audience.

The Mejlby Stone installation was designed and developed by CAVI. Since early 2009, it has been part of the exhibition at The Museum of Cultural History in Randers, Denmark.

I had the overall responsibility for the audio, and worked closely together with Henrik Munch who composed the music. I also did the sound design, and designed and implemented the entire sound engine in Max/MSP, including the design and implementation for the adaptive music in the interactive part of the installation.

The design point for the sound effects was to make the projected images on the stone be believable. The main purpose was to support the visual illusion of the stone actually being chiselled, that it is cracking open, and to make the weather effects as real as possible.

To accomplish that, samples were layered, edited, and processed in Wavelab and Cubase. For example, the sound of the snow piling up is based on heavily edited samples of footsteps in the snow, where the impact of the step has been cut out and the remaining pieces stitched together.

The end result was surround mixed in Cubase and implemented in the sound system in Max/MSP.