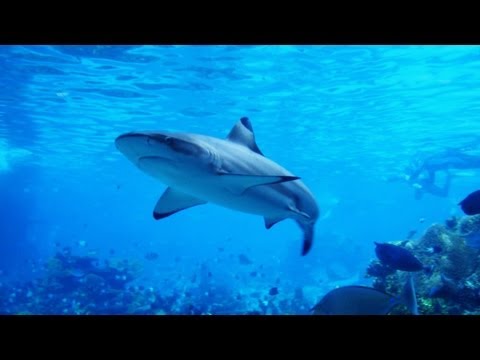 In this project we created a generative and algorithmic sound design for a shark aquarium. The goal was to create an immersive audiovisual experience based on the contrast between the sharks being dangerous, yet fascinating and calm, and the intimate and zen-like visual experience you have when standing in front of the giant aquarium.

When new sound elements are born and make their way to the surface, they weave in and out between the existing ones and create new harmonies and chords which evolve in a unique and non-linear manner. The algorithm driving the sound design is based on chord theory, and ensures that the overall sound stays harmonic and that it evolves in a unique manner every time.

The Sharkness is designed in such a way, that no matter what is going on inside the shark tank, the visitor should always be able to make some kind of connection between what is heard and what is seen – but it is not adaptive as such as there are no sensors keeping track of the sharks. Rather, the sound design is based on pre-observed visual patterns.

The Sharkness is designed and developed by bitCrushers and was exhibited at the shark aquarium at Kattegatcenteret in Greenå, Denmark.