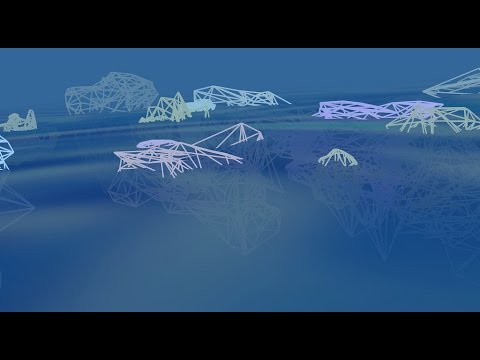 Waterfield is a stereoscopic 3D movie by the Aarhus based artist Jette Gejl, produced in collaboration with CAVI. It was exhibited at Narsaq Museum in Narsaq, Greenland. I had the role of Sound Designer on the production.

The movie depicts a stereoscopic tour of a barren vector graphics landscape consisting only of water and icebergs. The camera floats around in the air, goes underwater, and then penetrates some of the icebergs as they come alive with colour and movement.

Sound Design
The concept for the sound design was to create a soundscape to support this vast and empty world consisting only of water and icebergs. I wanted the sound to be otherworldly and abstract, but still somewhat believable and recognizable. The sound of the wind, the vastness, and the popping of the air pockets in the icebergs as they slowly melt, create a background soundscape that is not too intrusive. The sharp and intrusive, yet somewhat melodic, sounds as the icebergs come alive and the camera goes inside them work as a dynamic contrast change to give the feeling of sudden energy and life – which is then replaced by a new dynamic change as the energy suddenly disappears and we return to the vastness and emptiness.

The switch from above water to underwater proved to be especially tricky, and required a lot of filtering, pitching, and effect tweaking to pull off while still maintaining a coherency and the sonic feel of the world above water.

Technology & Tools
Most of the audio was created by heavily editing, layering and processing sounds from the STS-33 “Space Transition Synthesizer”. Wavelab and Cubase were the main audio tools used.

The video above is the non-stereoscopic version and does not require 3D glasses.